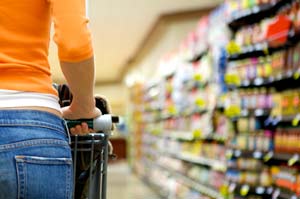 Our local Tesco closed for a week, while they complete their extension work… it takes a lot of effort to reshelve hundreds of thousands of items!

We left it a further week, thinking they’d be swamped in their first few days. Then we headed in, to see what changes had been made to the Free From section.

My expectations were low, but my daughter’s level of excitement increased as we followed the aisles up and down, looking for it. “It’ll be round this corner… it’ll be a big section at the back… it’s going to be huge!”

Could we find it? No. It used to be next to the bakery section, on a back wall – no sign of it anywhere near there. There was still space on the shelves in the bakery section for the Genius bread, though those were empty. But where was the Free From section itself?

I asked someone refilling shelves; they didn’t know where it was now either, and had to ask around. Eventually we did find someone who took us there.

It was in among the tinned meats.

What? Not even with the exotic foodstuffs? Near the pharmacy? With health foods? Near home-baking?

I’m very glad they still stock some free from foods; I was beginning to think, as we traipsed around, that they’d abandoned it. But the location is odd (and the staff agreed with us), and the range no bigger than before. More of each item (so that’s good!) but nothing new. It’s clearly not a priority for Tesco.

Whereabouts in your local supermarket is the Free From food shelved? Are gluten free items scattered about alongside the ‘normal’ items, or does it have its own dedicated section?