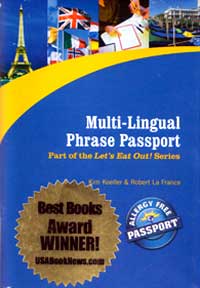 Husband and coeliac daughter are just back from a skiing holiday in Austria, and they took the Multi-Lingual Phrasebook

They thought that overall, it was great, and a real help. Just having the book gave them more confidence going into a restaurant.

They had a few comments:

And my husband suggested that it would be helpful to add phrases such as:

Can you please check (with the chef) that this dish contains no gluten (wheat, rye or barley)

I think a pronunciation guide would be helpful too.

Overall, though, a thumbs-up, and I expect the book will be going with us when we go to France in the summer. Though both he and I are better at French than German …

Gluten Free Book up for Awards