You are here: Home / Campaigns / Coeliac Awareness Week 2007: Getting to Diagnosis

Yes, it’s Coeliac Awareness Week here in the UK again, and local groups are organising events to promote awareness of this disease. The focus this year is on getting diagnosed. 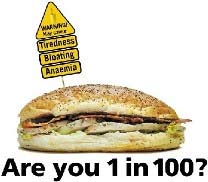 Here in the UK, it’s estimated that as many as 1 in 100 people have the disease, and many – indeed, most – of these are undiagnosed.

According to Coeliac UK, it can take as long as 10 years from someone first presenting themselves at their doctor’s surgery with symptoms for them to get a diagnosis.

Luckily, it didn’t take us that long to get my daughter diagnosed – after all, that’s almost her entire lifetime! We first became aware that something wasn’t right at Christmas 1996, when she was just 1, and I took her to the doctor several times in the early part of 1997. Her symptoms worsened:

After a while she was tested for giardia, and then for cystic fibrosis, and finally she had a blood test for coeliac disease followed by a biopsy. In autumn of 1997 we had a firm diagnosis and were allowed to change her diet.

And within a couple of weeks, we saw an extraordinary improvement in her health and energy levels – and she asked for food.

This tiny girl who had refused food, and vomited it up regularly, and who was unable to get the nourishment she needed from our everyday meals – now wanted to eat.

It makes me want to cry even now, 10 years on, just thinking about that day.

It took us 9 months – not 10 years – to get a diagnosis, and that’s because our doctor knew about coeliac disease, and was prepared to consider it as a diagnosis. 9 months was just how long it took to get through the programme of tests and appointments.

We need more awareness of the disease, to ensure that people don’t have to live with the symptoms for even as long as 9 months, never mind 10 years!

Is it Coeliac Disease?

The stripper, her nurse’s uniform and coeliac disease