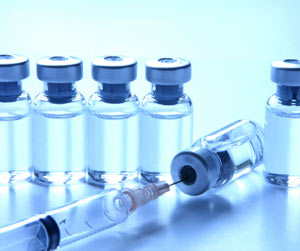 Would you accept a weekly injection if it meant you could eat a ‘normal’ diet?

The third session at the British Society of Gastroenterology Patient Symposium was the one that I found most interesting.

Professor Anderson is working on a treatment programme for coeliac disease.

How would it work?

His vision is of a desensitisation programme (one that ‘switches off’ the immune response to gluten) that would involve 3 injections a week for a month, then a weekly self-administered injection.

This wouldn’t be suitable for everyone, only for those with the appropriate genes. But discovering whether you have the ‘right’ genes is relatively straightforward via a blood test.

You’d also have to have a fully healed gut before starting, proved by endoscopy.

Once well into the programme, you’d need a repeat biopsy to confirm that it was working, and that you weren’t suffering from silent symptoms.

After 7 years, Professor Anderson has ‘proof of concept’. He’s done pre-clinical tests, identified the 3 critical components of gluten, and has managed to switch off the immune response in mice.

He’s now in Phase 1, and is testing on 34 coeliacs with the appropriate gene, and has confirmed that he has correctly identified the toxic elements of gluten. The next study would be with over 100 people. If that were successful, then regulatory approval could be sought.

However, they need $15m for research and volunteers.

This doesn’t seem like such a vast sum to me. Yes, it is a huge lump sum, but surely not in terms of the amounts of money spent on pharmaceutical research in other areas.

So I wondered whether there’s an option for crowd-funding of this research. How many coeliacs are out there who would pay a small sum towards funding this research? How many would accept a weekly needle in exchange for a ‘normal’ diet?

There’s no guarantee that his research would result in a treatment programme, so it would be a gamble. But what do you think? Would you pay? Would you self-inject?

TB more likely for those with CD