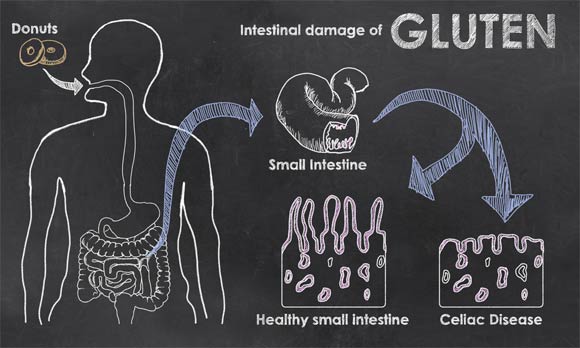 Newly diagnosed with coeliac disease, cut out gluten completely, but still having trouble digesting dairy products? You could be suffering from secondary lactose intolerance.

Lactose intolerance can have a genetic cause:

Eating gluten causes an immune reaction which shortens, or even flattens, the villi, resulting in a decrease in the digestive enzymes – and these enzymes include lactase, which helps digest the lactose found in milk. If you don’t have enough lactase, you can’t digest lactose, resulting in those all too familiar symptoms of nausea, diarrhoea, stomach pain and bloating.

Once you’ve stopped eating gluten, and the gut starts to heal, the villi – and microvilli – will regenerate. For most people with secondary lactose intolerance, this will mean that they can digest milk products again. It often takes six months to a year, and can take two years.

(Be aware that lactose intolerance is not the same as a milk allergy. )

Assuming that it is lactose intolerance, what should you do while you’re waiting for your villi to regenerate?

Lactose is found in milk from cows, sheep and goats (as well as from humans), so cutting out these milks is an obvious response. But people vary: some may be able to have a small amount of milk, while others find even a small amount triggers symptoms.

And don’t just cut out lactose completely without consulting your GP or dietitian for advice, because you may miss out on other essential nutrients, such as calcium, potassium, magnesium, zinc, and vitamins A, B12 and D.

In addition, there does seem to be evidence that you can eat some cheese (but not milk) even if you are lactose intolerant. Studies show that many people can tolerate a small amount (10-12g) of lactose daily – and the amount of lactose in milk / yoghurt and cheese varies:

Try (a small amount to start with of) hard cheese such as cheddar or gruyere. The reason for choosing hard cheese is that in the cheese-making process, starter cultures of bacteria are added to milk that turns lactose into lactic acid. Starter cultures are usually used to make aged cheeses, not fresh ones.

Dieticians also suggest eating yoghurt, hard cheese or a small amount of milk as part of a meal, rather than on its own, because that will help.

But be aware that milk products appear in all sorts of other foods, so you might get up to the limit that you personally can tolerate without even realising it. So always check the label! (Just like looking for gluten, really).

In the EU, manufactured foods will clearly list if milk or an ingredient derived from milk is contained in the product. But if you are not in the EU, you will need to look out for:

On Dairy: why choose goats milk?