You are here: Home / Living Gluten Free / Allergy and Free From Show 2016 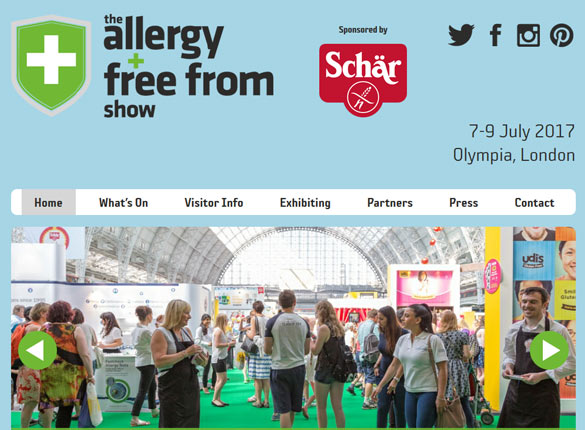 I’ve got mixed feelings about the Allergy & Free From Show this year.

We went down to the London show on Friday, when it was busy, but not hectic—we usually go at a weekend, when it is difficult to move around—and we thought it was great.

Coeliac Daughter looks forward to it every year, and enjoys finding new products and tasting a wide variety of different foods (though I couldn’t persuade her to try the cricket brownies). She particularly likes knowing that she could eat anything she wanted to try.

At least, that’s what we thought.

This year we particularly enjoyed:

It was also fun that Schar were cooking their pizzas to order—and yes, we shared a veggie gluten free pizza.

So a big thank you to the organisers of the Allergy Show, who work all year to make these events work.

But why am I feeling conflicted?

I think there are two things.

It wasn’t instantly clear which stalls had gluten free products, and which didn’t.

The organisers had done their best, with different coloured carpets, and hanging signage. But we were too focused on the stalls to look up, and it wasn’t clear to us from the outset that different carpets meant different shows, so we ended up in the veggie/vegan area (the Just V show) unknowingly.

There we spotted gluten free pancakes, and decided to come back later to try them. But by the time we were ready to eat pancakes, we’d realised that the carpets meant different things, and we struggled to find the gluten free pancake stall again. (Obviously we did eventually decide to look in the ‘wrong carpet’ area… and yes, they were in the vegan section).

I don’t think we were being particularly slow to pick up on this, as we saw others straying off their path too—vegans being surprised to find meat products, for instance.

This confusion could, potentially, lead to someone trying a product that wasn’t gluten free because they were under the impression that everything would be OK to eat. It was no longer true that Coeliac Daughter could try anything in the room.

The market is maturing

I know we’ve been to a lot of these Shows, so you’d expect us to be familiar with a lot of the companies in the marketplace, but it did seem to me that there were fewer new and exciting products for us to find out about.

And there was clearly a huge difference between the large, made-to-measure, expensive stands set up by the Big Guys (Schar, Genius, Tesco…) and the smaller stands. Of course there was: the Big Guys have a lot more money.

According to the Allergy Show sponsorship website, for instance, Doves Farm spent £25,000 to sponsor the cooking zone, and Tesco spent £15,000 to sponsor Speakers Corner.

I don’t know what Schar paid for the headline partnership, and for the show bag sponsorship, but we can calculate from the Allergy Show rate card that they spent around £33,600 for their stall space of 14m*8m (where they cooked pizza).

And that’s fine. The Allergy Show has to make money somehow, to pay for the space in Olympia. After all, we (and I’ll bet 99% of visitors to the show) downloaded free tickets, so they didn’t make any money from us.

And it is undeniably a fantastic—even unbeatable—opportunity to get your brand in front of your core target audience.

But I feel some concern that some of the smaller, newer companies may have been missing.

Yes, there was the Artisan Marketplace, with 15 stalls (minimum size 2m*1m, costing £700—very reasonable, really, for the potential marketing success available, assuming 30,000 visitors over the whole weekend), and that was great. And the Allergy Show can of course only host companies that apply to have a stall.

But something was missing. In every other year we’ve had one of those “oh wow, look, gluten free X!”, where X has been something that we’ve not been able to get gluten free before.

Not this year. Perhaps there just aren’t very many new and exciting products this year, or maybe we’ve had peak innovation already, and all that’ll happen now is consolidation.

I wonder if there is a way to get the innovative feel back, perhaps by creating an Innovation section for new products/ideas, whether from start-ups or from big companies—maybe a big company could be persuaded to sponsor the stalls within that section (they might even find a new and valuable idea in there).

What do you think? Did you go to the the London Allergy Show this year?