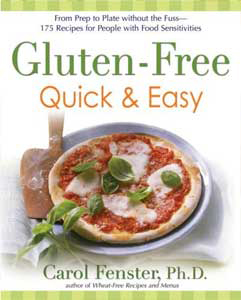 I wrote yesterday about my first impressions of Carol Fenster’s new book, Gluten Free Quick and Easy – and you can read my interview with Carol here. Today, I’m going to tell you about the recipes I’ve tried …

I set out to make Double Chocolate Chip Cookies first – wouldn’t everyone – and I have to confess that they were a complete disaster. Husband rudely described them as moonrock … but it wasn’t Carol’s fault.

I do have a dim memory of my mother possessing two different sets of cup measures – one for UK measures, and one she’d acquired while living in the US. I only possess one set, and these were, of course, the wrong ones. As I set to, mixing and measuring for my choc chip cookies, this faint trace of memory did surface briefly, but didn’t make enough impact to change my process.

As no doubt you all know, a US cup is 8 fluid ounces; in the UK, it is 10 fluid ounces. As I tried to make the mix bind together to form a dough, I did think it was rather dry – no wonder, since I was using significantly more dry ingredients than Carol’s recipe called for, and my poor, lone egg didn’t have a chance. As a rule, here in the UK, we don’t use cup measures for baking, but pounds and ounces, so I was setting off at a disadvantage anyway.

Once I’d done my research on the net, and found that the only US cup measures available on line here in the UK are out of stock (now, why would that be? Gap in the market here, folks), I decided to do complicated sums in my head, and convert cup measures to ounces … 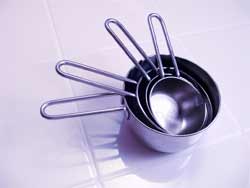 Now these turned out really rather well. None of the ‘gritty’ taste that often comes with gluten free products … I’ve eaten three already.

Carol’s baking process isn’t one I’m used to – her recipes all seem to start with blending the egg and fat, while I would usually rub the fat into the flour first – but it does work, and I was very pleased with the scones.

I’m beginning to crack the conversion technique, and these were a whole lot better than my first attempt! The ingredients pulled together to form a lovely workable dough.

Still perhaps slightly on the dry side – I’m cooking in an Aga, which brings its own unique style to every dish. Next time I’ll put the cookies higher up, and remove the cooling sheet part way through to let them brown.

I’m enjoying this review process – but I bet Carol never expected her recipes to be tested using UK measures on an antique Aga! 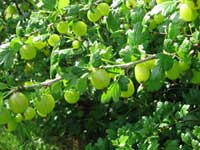 This was fabulous. I used gooseberries because we’ve a lot of those in the garden at the moment – and it was gorgeous. The topping is much lighter than a crumble topping, and went very well indeed with the gooseberries. I shall be producing this again at the weekend, when I have family coming.

All in all, I’d say that these recipes worked well, once I’d got over the initial cultural differences! I’d be happy to recommend this book, especially if you were based in America. And I think it would be particularly useful for someone new to the diet, because of the information surrounding the recipes.

For those of you not familiar with the conversion of US measures to UK measures, this might help:

The differences are due to the different densities of the stuff to be measured.

I’m still working in imperial measures – if you’ve gone metric, you’ve got a different calculation to do …