You are here: Home / Living Gluten Free / In which a Cheat realises the Error of her Ways

Talking of food technology, as I have been on and off recently, our celiac daughter has had Food Tech at school again this term. This subject used to be called Domestic Science when I was her age, and may have been called Home Economics at some point too – but children all know it as Cookery. 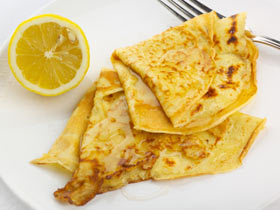 Last year they studied baking; this year it has been sauces. The first couple of weeks she brought home tomato-based sauces, so the children ate her Bolognaise and then Chili con Carne, both of which worked well, and are easy to make gluten free. Just remember to check any stock you add.

Then they moved on to white sauces…

Now, although I was taught how to make a roux all those years ago, I’ve been using the cheat’s method of making gluten free white sauce, which uses cornflour to thicken it. The first time they made a white sauce in Food Tech, I sent in ingredients to do it this way, and she came home with a decent – though slightly too ‘set’ – Tuna Pasta Bake (obviously made gluten free). The Food Tech staff were intrigued to know how she was going to make her basic white sauce, since the point of the lesson was to learn how to make a roux, and I suspect they were slightly disappointed to realise we were cheating.

So the next time, and having been encouraged by Annalise Roberts’ book, (reviewed here) which has instructions for a roux-style white sauce, she went in to demonstrate that she could do it this way too (you know: melt butter, cook the flour in the butter briefly, stir in milk gradually) – and that worked too. I did experiment before making her do it in school! Annalise Roberts uses potato starch, but I used the Wellfoods flour mix, which is rice starch based, I think, and that worked just fine.

Then they made savoury pancake batter – crepe style, not Scotch/American style – and her gluten free pancakes were an absolute triumph. Proud parental boast coming up: they were displayed to the class, because they were fab. Double triumph, really, because they were gluten free, and so, naturally, slightly different from everyone else’s… they were shapely and held their shape without falling apart, nicely coloured, and tasty. I know, because they were brought home. So they survived the bus journey, and reheated well, too! OK, so a French kitchen would never serve crepes that had suffered this way, but it worked for us.

How have your children coped with cookery lessons in schools?

Gluten free Mothering Sunday meal – made for me

Getting Saucy with The Black Farmer