You are here: Home / Living Gluten Free / Getting Saucy with The Black Farmer 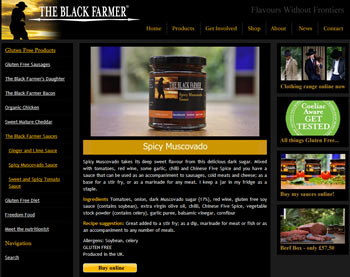 The Black Farmer sent us some sample jars of their sauces to review – ages ago, and they’ve been sitting on the side in my kitchen for months, so you can see how hectic life has been here!

The Black Farmer is of course famous for their sausages (and just won an award at the British Sausage Week 2010), but these sauces are a re-release. Apparently they used to be available, but have been absent for a while.

Based on our tastings, I think they’re likely to be a successful venture, though I haven’t noticed them on the shelves at my local supermarkets.

The spicy muscavado was excellent as a coating for salmon: this was my favourite. We tried the tomato one with salmon too: though I thought it was a little chunky to make an ideal coating sauce, my daughter loved it. Definitely her favourite (and it was tasty), as she loves a tomato sauce. I preferred it as a dipping sauce, or as an accompaniment to cheese.

I was less keen on the ginger and lime sauce, as I found the aftertaste a little bitter – perhaps I should try mixing it with creme fraiche, as the Black Farmer recommended. However, just to show that everyone is different, my husband really liked this one.

So I guess you could conclude that there’s something for everyone here.

Another idea for a complementary product for the Black Farmer would be hearty soups (fresh ones, not tinned): I think both meat soups and vegetable soups would work. Or maybe country pickles, to go with the sausages? Or even ready meals such as a farmhouse bean and sausage stew?

Whichever direction they choose to go in, I suspect that they’ll get a good reception from the coeliac community. There’s such a strong brand following now… I know that if I’ve picked up a pack of another supplier’s gluten free sausages and then see that there is Black Farmer available on the shelves, I’ll put the first pack down. I did just that earlier this week, and then realised the significance of what I’d done.

The Black Farmer: Trial by Teenager