You are here: Home / Awards / Ginger is the New Chocolate: Judging at the Free From Food Awards 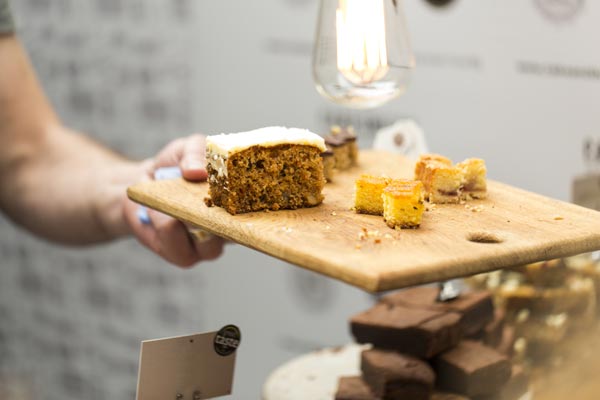 What do you think about gluten free cake—and how do you think you’d feel about eating 32 different cakes or biscuits in an afternoon?

I was excited to head to London last week to be on the judging panel for the Free From Food Awards again—the tea-time session: cakes and biscuits.

In one sense it was an easier session to judge this year than last, because there were fewer entries (last year we ate through 55 cakes…) and no chocolate brownies. I like a chocolate brownie (though I like my mother’s version best), but there were an awful lot of chocolate entries last year…

This year the key flavour was ginger, to the astonishment of an American judge – apparently ginger cake and ginger biscuits aren’t such a big thing in the US.

You wouldn’t think that gluten free cake had trends and fashions, but it really does, and clearly ginger is A Thing at the moment. And thank goodness there are trends: I’m delighted to see a trend towards gluten free celebration cakes and sharing cakes available in supermarkets. Sharing food, particularly at celebrations, matters; and not just to children.

Overall, of course, the trend is for gluten free cake to get better – which makes it harder to distinguish the front-runners at a judging event. There are always a few of the old-fashioned offerings that just don’t make the grade in terms of taste and texture; but there are an increasing number of innovative brands – often the smaller manufacturers – that are really trying to offer us something new and better.

And that makes judging hard, and means that the judging panel gets increasingly picky. There’s certainly a lot of debate and discussion about everything from the taste and texture to the ingredients and the labelling. We taste blind (so we don’t know who has made any of it, and we’re not swayed by any branding) but we are given a list of ingredients, and told what claims to be allergy-free are made by each product. And these are taken very seriously, and discussed in detail.

What is better, a cake that makes every effort to be allergy-free (meaning it can be eaten by lots of different people) or one that a particular group (say, coeliacs) has been asking manufacturers to make for years and which is technically difficult to make?

And there was lots of discussion about the difficulties of mass-producing cake, and of making it available across the country. One of the judges in the session I went to works in free from for a large supermarket, and spoke about how difficult it is to get shelf space for free from foods, or to get manufacturers to switch to making foods free from (even when it would only take a tiny change). That was fascinating; we may complain about the range of foods available to us in supermarkets, but someone, behind the scenes, has been working very hard to get those onto the shelves. And there was a great deal of discussion about whether those shelves should be dedicated free from shelves, or whether free from food should be available alongside ‘normal’ food.

It’s always entertaining to be on the judging panel, and we all had our own favourites. At the end there’s a big reveal, so the judges can find out who makes which cake, and make notes on which to buy (or recommend that you should try).

No clues here about which were the winning products (it’s a secret!), but my personal favourites included:

The shortlist will be out soon – and the Awards ceremony will be in a couple of months. It’s exciting for the judges and for the entrants. After all, I only ate cake this year; there are lots of other categories to find out about!

Free From Dilemmas: How to Judge