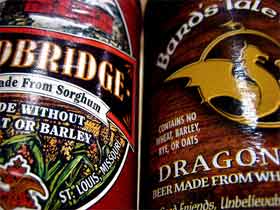 Now I normally wouldn’t be particularly interested in a beer festival.  Though I have written about gluten free beers several times in the past, I don’t actually drink the stuff.

But this caught my eye today, on Google News:

Apparently there is a Great British Beer Festival going on at the moment, in London (and they timed the Olympics to clash with it?). Not just British beer, but beers from all over the world, with over 750 different brews, including some gluten free beers. I was delighted to note this comment in the press release:

I love the names, don’t you? Old Stoatwobbler … I wonder if that one was gluten free?

Did you miss the gluten free beer festival?

Apologies – I have a problem