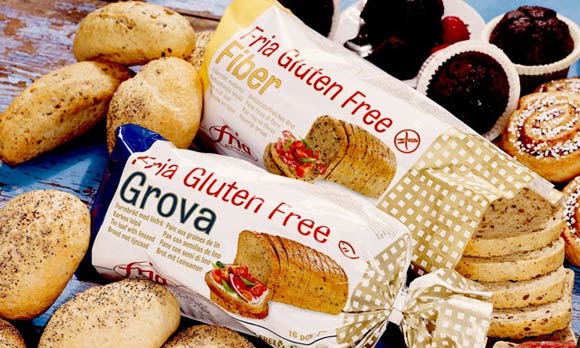 And my third new find of the week…

Have you ever heard of Fria? I hadn’t, but apparently they are the market leader in gluten free bread in Scandinavia.

The Fria breads will be available here in the UK until the end of February 2011, but only from those two places, as part of a promotion of Swedish food in collaboration with the Swedish Trade Council. If you’re interested, then make a special trip…

I wish this trial was running across all John Lewis stores, so that more people would have a chance to try it. Not everyone living gluten free lives in London; I just happened to be in London that day, and was invited to attend.

The breads are frozen, but once defrosted need no refreshing. There are 3 breads available in the UK for the moment: a seeded brown, a white, and some mini-baguettes.

I thought the bread was good: no ‘gritty’ taste, and no after-taste either. Personally, I preferred the seeded brown, but I bought one of all three products to carry home for my daughter to try. And Fria gave me a Kladdkaka (a chocolate brownie cake), which is really very good indeed.

But what I’d really be interested in is their other products, especially:

Have a look at the Fria products and let me know what you think. More importantly, let Fria know by email what you think. If there’s enough demand, and if they can set up a relationship with a supermarket, then Fria will consider importing products on a longer term basis.

Are you listening, supermarkets?