You are here: Home / Living Gluten Free / Will climate change be good for coeliacs? 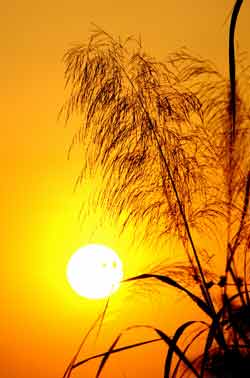 Amazingly, German researchers from the Johann Heinrich von Thunen Institute in Braunschweig, have shown that high CO2 levels in the atmosphere lead to wheat crops with less gluten.

This is because CO2 disrupts nitrogen uptake by the plants, and this in turn causes the protein deficiency.  See the New Scientist blog for more.

As the New Scientist points out, this rise in CO2 is also a contributing factor in the global rice shortages, so it isn’t good news for coeliacs. (Or for anyone …)

Plus, of course, the fact that there is less gluten doesn’t mean that there is no gluten present – so the future wheat crops won’t be any safer for coeliacs to eat.

The New Scientist suggests that farmers could opt to grow genetically modified wheat varieties capable of producing higher than normal gluten yields. We all know how unpopular that will be round here …

Of course, some people have suggested that we could have genetically modified wheat that contains no gluten. I can’t really see that going down well either, whether with the anti-gm movement, or with those people who are both wheat and gluten intolerant.

So there isn’t good news here – but it is alarming, isn’t it, how widespread the impact of climate change will be?

Foods to avoid if you are avoiding gluten

Is bread making us ill?