What do you eat when you’re feeling ‘snacky’? Yes, there’s always the banana, the coeliac’s friend, but sometimes you just want something a little sweeter and stickier, and a little less fruity.

Some people swear by energy bars, but they often contain gluten – usually oats – and you may have decided to avoid them completely, just to be safe. We’ve recently been sent a couple of varieties of these snack-bar things that are gluten free to taste and review.* 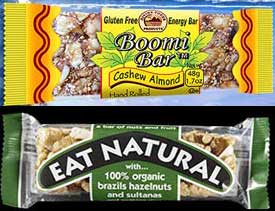 Divine Foods sent us some Boomi and Prana Bar samples. Two different varieties (the Coconut Acai Prana bar – 220 calories – and the Apricot Cashew Boomi bar – 190 calories), and we all tried each of them. They are quite sweet and chewy, because of the dates and raisins; the ones we had were amaranth-based, instead of oat-based, which was interesting.

Predictably, we had two wildly divergent views: some people loved one, and some the other. No agreement here – typical!

Goodness Direct sent a box of goodies, including some Eat Natural bars. We tried the ones with brazils, hazelnuts and sultanas, and the comments were ‘tasty.. interesting… big dry chunks of nuts… would eat this again’. Note that though the ones we tried used puffed rice as a base, some Eat Natural bars are oat-based, and so are NOT gluten free.

Overall? I won’t be buying either on a regular basis (not that Boomi/Prana are available over here), though I can see that the Eat Natural bars are a handy stop-gap if we’re out somewhere and need food in a hurry – they’re widely available here in the UK, in train stations, supermarkets and corner shops. The downside to these energy bars that I see is that there’s a lot of calories in a small space. There’s a reason why they’re called ‘energy bars’…

We’re probably not the ideal tasters for this kind of product, as it isn’t something that we’d buy as a rule. But perhaps you are? What snack-bars have you tried recently, that tasted good, and filled that ‘snacky’ need?

Me, I’m still sold on the Graze scheme, where they send a regular box of snacks chosen from nuts, seeds, raisins, fruit, olives … I like the surprise element, and receiving a parcel each week. Really, though, I need one a day, because the snack box doesn’t last long enough – or else I’m just greedy…

* Disclosure: we were sent free samples.

Counting the Calories in that Gluten Free Snack