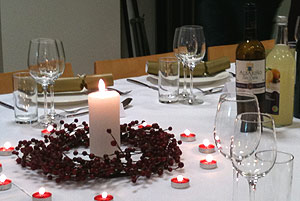 Bizarre as it sounds, given that this is still early October, I helped Sainsbury’s cook a Christmas dinner last night.

Well, in theory. In practice I spent too much time chatting to the other guests to do much cooking, so the fact that we had a delicious meal is no credit to me.

Among many others, I chatted to Dena from Beautiful, Active, Nourished, a nutrition and health business based in South Manchester, where she runs clinics and also has a gluten free bakery/patisserie; and Kate, from Postcards from a Gluten Free Life. Kate recommended Bake A Boo in West Hampstead for afternoon tea; if I ever take my coeliac daughter to London (after a must-do trip to Sainsbury’s in Pimlico, which apparently has the biggest gluten free range in the country), that’s where we should go.

I also met Kirsty from Worthenshaws, whose new Freedom desserts won approval in the Dragons Den – they’re now available across the country. Like many others, her son has a nut allergy and dairy intolerance; unlike almost all others, she decided to set up a business to create foods he could eat and enjoy.

I talked search engine optimisation with Darren from PHD, and social media with Hayley from Dare. And it was good to meet the Sainsbury’s team, some of whom I met in February.

I wish I’d had more time to talk to the other gluten free bloggers – such an interesting mix of people. Do go and check out http://www.glutenfreemrsd.blogspot.com, for instance,and http://www.theparticularkitchen.com/.

Apart from all the talking, we produced between us (though the Sainsbury’s Try Team did the bulk of the work) an excellent meal, suitable for many and various allergies and intolerances, as well as lifestyle choices such as vegetarianism. I definitely want the Sainsbury’s recipe for almond nut roast, as it was wonderfully moist – and gluten free. (Though I forgot, again, to collect the recipe for gluten free profiteroles, despite working on that station. I wonder how they turned out? I had to catch the last train north…)

It’s clear from the guest list that Sainsbury’s work closely with other organisations such as Coeliac UK, and the Anaphylaxis Campaign, though they also have an internal team dedicated to the development and production of free from foods.

Sainsbury’s re-emphasized that they want to be seen as the #1 provider of free from foods, and that they welcome feedback from customers. That’s you and me. And do you know what? I believe them.

So if you’d like them to change something in their free from range, or if you think there’s something missing from the range altogether, let them know!

Most interesting snippet from the evening: they’re working on an app for your smartphone, so that you can assess the suitability of food instore by swiping the barcode. How cool is that?

Feedback from the Free From Aisle